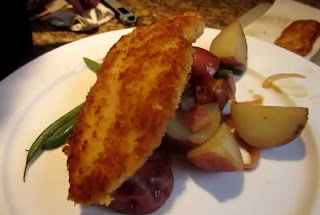 A few weeks ago I was watching an episode of "Restaurant Impossible" while I was about to start dinner.  I had planned to make chicken breasts - with what else I don't remember!  Robert Irvine, the chef of the show, was teaching the restaurant cook how to make a dish composed of chicken breasts served over a warm potato salad.  I was amazed to see that he coated the chicken with egg beaten with honey mustard - this was exactly what I was going to do having discovered some time ago that the honey mustard adds great flavor to the chicken.
The dish looked so delicious that I stopped what I was doing, went to the grocery store to pick up the ingredients I needed and made the recipe then and there.  I adapted it quite a bit from the original which involved a half gallon of oil to cook the chicken and three or four skillets.  I think this is a dish which you will enjoy too!
Note:  In my video demonstration, I used half the ingredients, but the recipe below will serve four.

In a medium-sized skillet, cook the diced bacon until browned and crisp.  Remove to paper towels to drain and reserve 2 tablespoons of the rendered fat.  Wipe out the pan with paper towels.
In a food processor, mix the vinegar, bacon fat and mustard. Mix well, and then slowly drizzle in the oil until well emulsified. Taste and season. Note:  if you don't have a processor, simply whisk the ingredients together.
In a dish, blend the honey mustard and eggs. Next, sprinkle the breasts with the salt and pepper. Then toss in the flour, then the egg wash and finally coat each breast well with the breadcrumbs. Repeat the process with each breast. Preheat the oil in the skillet until shimmering. Fry for 3 minutes. Flip and finish for a final 3 minutes. Once the chicken is cooked, remove from the oil and allow any excess oil to drain on paper towels. Wipe out the skillet again.
Warm the olive oil in the skillet over medium heat, warm the oil and then add the shallots, haricot verts and potatoes. Cook, stirring occasionally, for 3 to 4 minutes. Then reduce the heat and keep warm for dressing.
Add hot chicken stock to dressing and whiz until emulsified.  Add to the potato mixture and stir to coat.
Place one quarter of the potato mixture on each of four plates, sprinkle with bacon and top with a chicken breast.