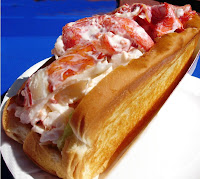 A trip to Maine would not be complete without a lobster roll, that incredibly simple treat which demonstrates that the total is greater than the sum of its parts!
I'm a great fan and promoter of British cooking, but I was appalled to read one chef's (who will not be named - but he is noted for his "colorful" vocabulary) recipe for a lobster roll.  It had just about everything in it but the kitchen sink.  He totally missed the point of a lobster roll - lobster!
All you need is the meat from a cooked 1 1/4 - 1 1/2lb. lobster, 1/4 cup of finely diced celery and a scant 1/4 cup of mayonnaise.  Mix these ingredients gently and place in two top-split hot dog rolls which you have buttered and toasted.  You could stretch it to three rolls if you wish.
A simple dish which is one of my favorites - I hope you will enjoy it too.
P.S. For directions on how to remove the lobster meat from a whole lobster watch the first part of my video "Lobster Pasta Sauce."

THANKS FOR "NO SCREW UP" RECIPES!

Betty, your series on cooking is very informative.  Cooking is one of my hobbies.  Because of this, I find myself reading a lot of recipes or seeing someone on TV cooking.  You've hit on one of my pet peeves (in particular when you were discussing "Lobster Rolls") which is that some chefs make dishes that are overly complex resulting in masking the subtle flavor of say lobster.

I could well sympathize with you about how "appalled" you were to read that a certain chef advocated putting a lot of ingredients in his/her rolls which, obviously, compete with the lobster flavor.

Of late, the use of gorgonzola has been dangerously recommended (my opinion - even though our favorite cheese is Stilton), I would almost never include it as an ingredient [it's also very expensive]).  Another culprit is Garlic.  Many people erroneously think that one could never put in too much garlic. There is a common misconception that Italians use a ton of garlic in everything.  Perhaps poor, peasant Italians might but, as you know, many more sophisticated Italian recipes might call for a hint of garlic if at all.


Then your Lobster Sauce used a Maine Lobster.  I've found a ton of people who are unaware that frozen lobster tails come from a different fish.  I buy live lobsters at the super market when they go on sale.   However, thus far your programs illustrate a simple way of cooking.  As the old expression states, "one has to learn to crawl before they can walk". What I mean to say is rather than to recommend a recipe that contains many chances to "screw up"(which isn't a problem with an experienced cook like you), you give them something that a novice could handle.  Good thinking on your part. Joel M.
Posted by Betty Bannerman Busciglio