I have been making pizza at home for years but have never been totally satisfied with it - particularly the crust.  It never seemed to develop the taste or texture I was looking for.  Along came Arthur Schwartz with his great cookbook “The Southern Italian Table”.  His recipe for the dough requires an overnight rise in the refrigerator and that makes all the difference.

He also uses far less yeast which I thought might detract from the flavor but that is not the case.  His recipe gives 16 ideas for toppings which, I am sure, will help inspire you to create your own. One which he did not mention - probably because it is not authentic - but which I had in a restaurant in Vermont, is a pear and gorgonzola topping.  Different, but delicious!

Another “secret” is to be sure and have your oven preheated to 550º for at least 30 minutes before you plan to bake the pizza.  A pizza stone helps, but I recently purchased a cast iron “stone” made by Lodge.  I wanted it for the barbecue grill so that I could use an even higher heat and I have found that it makes an even better crust.  It also works beautifully in the oven at 550º. 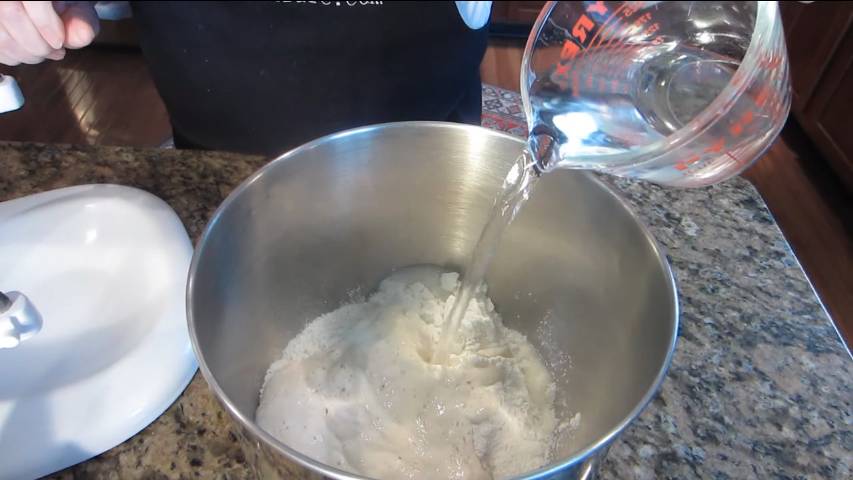 At least 30 minutes before mixing the dough, in a minimum 2-cup liquid measuring cup, sprinkle the yeast on ½ cup of the water.  Wait a minute, then stir with a fork until the yeast is dissolved.  Stir in ½ cup of the flour.  Set aside at room temperature and let the mixture increase to at least double, about 1½ cups.

Combine 3 cups of the flour with the yeast mixture and the remaining 1 cup of warm water in the bowl of a stand mixer fitted with the dough hook.  Mix on low speed until the dough just begins to mass together.  Add the salt, and continue to knead the dough with the dough hook until it looks smooth and the machine struggles a little.

Stop the machine.  Gather the dough into a ball and turn it out onto a lightly floured work surface.  Knead the dough for another 5 minutes, folding and turning it onto itself as demonstrated in the video, adding just enough flour as needed to keep the dough from sticking.

Lightly oil a medium sized bowl, place the dough in the bowl and turn the dough over so that all surfaces are coated with oil, cover with plastic wrap and place in the refrigerator overnight.

Remove from the refrigerator.  Allow to rise until doubled - this will take up to two hours, depending on the temperature of your kitchen.  After an hour, turn your oven on to 550º. 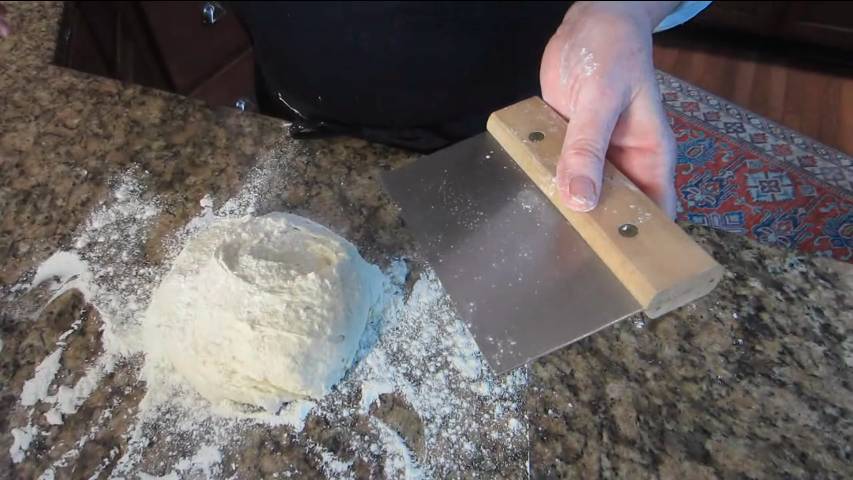 Deflate the dough by pressing it down, then divide into 3 parts.  Each will make a 10 to 12-inch pizza.

To form the pizza, flatten a ball of dough into a thick disk.  On a lightly floured surface, rotating the disk as you go, flatten the center of the pizza with your fingertips or the heel of your hand.  When a ridge of dough starts appearing on the perimeter of the disk, lift the dough up with both hands, and holding onto the ridge, let gravity and the weight of the dough stretch the circle.  Keep turning the dough to get a relatively even 10 to 12-inch circle.  Keep pulling the ridge slightly so the circle gets larger.  Be careful not to make the center too thin or the ridge more than a ½-inch deep.  Alternatively, you can use a rolling pin. 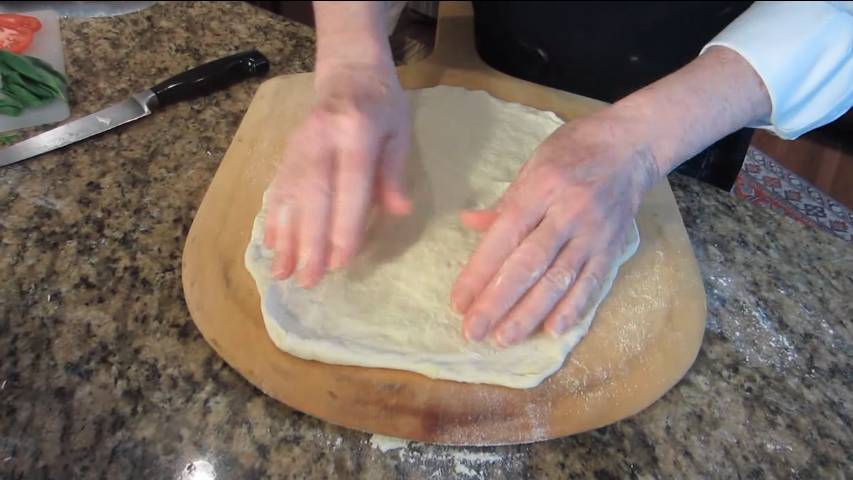 Spread the formed pizza dough onto a paddle lightly dusted with cornmeal.  If you don’t have a pizza stone, place the formed dough on a lightly floured cookie sheet.

Top as desired and bake for 8 to 10 minutes depending on your oven and the topping and how well baked you like pizza.

Pizza Margherita:  Scatter thinly sliced and well-drained tomato slices or crushed tomatoes sparingly over the dough, top with a few slices of fresh mozzarella and some fresh basil.

Potato, Onion and Rosemary:  Arrange paper-thin slices of precooked potato over the raw dough.  Dress with salt, rosemary leaves, and  few rings of raw onion and drizzle with olive oil.

Great recipes and presentation as usual Betty. I also did not know that letting the pizza dough sit﻿ overnight would enhance the flavor. I was so glad to see that you had uploaded another video. Your teaching techniques are great. Thanks for the info on Pet Finder. Annie is a doll!
auntnancy777